In 1869 when Mege-Mouries invented margarine he did not realize that he was going to start a controversy that would last over a hundred years. When margarine was first introduced it was to be a cheap product for the poor who could not afford real butter. It was not looked upon as a great invention by the governments of the world; instead it was questioned and regulated. Today when going to the grocery store you would not think that such an insignificant thing as margarine would cause a controversy that lasted for decades. (Dupre, R. 1999) 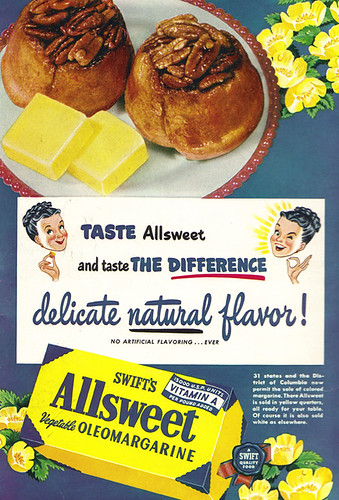 The government only allowed margarine to be sold if it was not yellow. This was in order to distinguish it from real butter. Margarine was suppose to be a cheap source of nutritious fats.  The reason for not allowing the food coloring was because some companies were using the coloring to say that it was real butter.(Dupre, R. 1999)

Dairy farmers did not like margarine because it cut into their profits. If people could buy something that was just as tasty as real butter for a cheaper cost, they were more likely to buy it. They were the driving force behind the campaign against margarine. This campaign not only helped them to save money, it contributed to the American people thinking margarine was unhealthy for them. By indicating to the American public that margarine was unhealthy for them they influenced them into not buying margarine. The National Dairy Association was so strong they influenced the government, by petition to impose some kind of penalty on margarine. In 1886 the Oleomargarine Bill was passed, this bill imposed a tax on anybody selling margarine. Some manufacturers started to sell their margarine as butter in order to get away from the food tax. Once the government realized this, is when they decided margarine could not be dyed. Three states, Vermont, New Hampshire, and West Virginia, decided that margarine had to be dyed pink in order to differentiate it from butter. The Oleomargarine Bill was not repealed until 1950, due to the large increase in the cost of butter. (Dupre, R. 1999, Rorty, J. 1947).

The Oleomargarine Bill may have been turned over but some states, including Minnesota and Wisconsin still insisted that margarine be dyed until 1967. Today while margarine is sold along with butter there is still an ongoing debate between the two. When an idea, such as the one implemented by the dairy industry makes its way into common thought, it is hard to remove it even when new ideas are made known.(Dupre, R. 1999)

Video is from archive.org and pictures are from creative commons.