In 1883 Harvey Wiley first began to study food, although the first attempt to regulate food was not began until  1902. Harvey Wiley was the head of the Bureau of Chemistry of the United States Department of Agriculture. He was instrumental in establishing food standards and led the fight to have the Pure Food and Drug Act a law.(Kantor, A. 1976; Rorty, J. 1947) 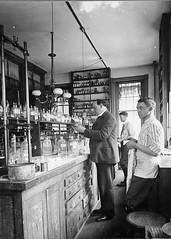 In his study to make food safer he experimented on several perseveres that were in food, these included: boric acid and borax, salicylic acid and salicylates, benzoic acid and benzotes, formaldehyde, sulpher dioxide and sulphites, sulphate of copper and saltpeter. The results indicated the first four grouping were harmful to people yet they were being used to preserved food that was then consumed by humans. Formaldehyde is now used to preserve bodies of the deceased. (Rorty, J. 1947).

Wiley fought for healthier food. Unfortunately  for  American’s health the food manufacturers had a great hold on magazine and newspaper publishers as well as a hold in politics. For example it is shown that nutritionist praised whole wheat bread in more nutritious than white bread, Dr. Wiley fully endorsed this. The government did not. They endorsed white bread to be better for nutrition going so far they put more white flour in bread to aid with digestion. (Rorty, J. 1947)

The passage of the Pure Food and Drug act did not produce a prosperous time for Wiley. President Roosevelt took away much of Wiley’s power. One of the ways he did this was by creating the Referee Board of Consulting Scientific Experts. This board reversed all of Wiley’s rulings and voted for the manufacturer of goods even if scientific conclusions supported Wiley. In 1912 Wiley stepped down as chief of the Bureau of Chemistry. (Rorty, J. 1947).

It’s interesting to study how we allow the media to influence us. What psychological instinct is in us to go with the pack? Why do only take up a cause when it will benefit us? When we see somebody with a cause different from ours to beat them down until they go away?

If you wish to read more about Harvey Wiley you can down load his book Wiley’s Health series from google books for free:http://books.google.com/books?id=YVxiN80NdWYC&oe=UTF-8

All photos are credited to creative commons.