For many years people had tried to get regulation on how food was processed. Between 1879 and 1906 approximately 200 bills were introduced, but failed to pass through congress. It was not until 1906 that a bill was finally passed through both houses.  What helped congress decide to pass a bill was the publication of articles in magazines that talked about food adulterations. In addition the readers of the Ladies Home Journal wrote letters to the President and Congress wanting a change in what was allowed into food.(Barkan, I. D. 1985).

“There seemed to be an understanding between the two houses that when one passed a bill for the repression of food adulteration, the other would see to it that it suffered a lingering death.”-Harvey Wiley (Barkan, I. D. pg 19)

Before the passage of the 1906 food pure food and drug act, there was no regulation in how food was produced. Doctors and the majority of the public wished for food regulations. Not everybody was enthused about regulating food, meat packers and the National Association of State Dairy and Food Departments were firmly against this bill. Why would these industries be so opposed to food safety? Money. Any regulations would change how they could run their business. They would then have to answer to the government about what they put into their food and how their food was produced. (Kantor, A. 1976)

In 1905 Upton Sinclair published his book The Jungle. In his book he describes the horrors of what goes on in a meat packing industry. Some of the stories tell about contaminated meat and hordes of rats. This book helped prompt President Roosevelt to investigate the meat packing industry. Due to word spreading about the upcoming investigations the plants cleaned up their factories before they were inspected. This caused a further scandal because it was discovered that workers were bribed not to tell how the plants produced their meat. The packers and the president did not wish for this information to be published because it could ruin meat exports, the farmers who stocked the meat packers, as well as the profits for the companies. The packers went so far as to promise the president if he would not publicize the results of the study they would clean up their act. This was not to be so, Sinclair was frustrated with the slow actions of the government, and he decided to inform the New York Times of what was going on. The Times ran the story; from there the story was related to Congress and to the American public. The results of this scandal caused action on the part of Congress; the Pure Food and Drug act was passed. (Kantor, A. 1976) 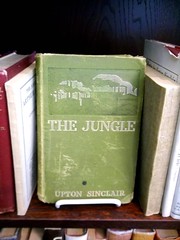 Pictures are credited to creative commons